Imagine you’re a refugee, or an immigrant, living in the United States. You work hard every day, delivering food so that you can make enough money to provide for your family, something I think most Americans can relate to. One day, you get a call to deliver food to a place you’ve gone to many times before. When you arrive however, they ask to see I.D. You can’t provide what they are asking for.  You’re arrested. That’s what happened close to home in Brooklyn, New York, at the Fort Hamilton military base, when the soldiers called ICE on pizza delivery man Pablo Villavicencio.

Take a listen to the sounds going on at these border detainment sites via The Daily by the New York Times: https://open.spotify.com/episode/69uOyUr0smxUWC4m9TRi53?si=4BuzRGJORxikLNJUK9MyCg
Among incidents like this that have gone on increasingly throughout the country, the most recent issue comes at our nation’s southern border, where ICE agents have been given permission to rip children from their families. Reportedly, agents would tell their families that the children were being taken away for “baths”, after time would go by they would eventually inform the parents that they would not be seeing their children again. These children are then being placed in cages, with shitty excuses for blankets.
It is commonplace now for us to deal with the shit storm of stupid crap from this administration daily, but this is something that I can not just sit idly by without saying something. I’m not one to jump straight to Nazism when seeing bad policy decisions from this administration, but this is strikingly similar to the Holocaust. While no one is being gassed, the Nazis frequently separated parents from children in their concentration camps.

Other than the blatant human rights violations that we’ve decided to go along with, what’s most striking to me is the indifference of people who claim to call themselvesChristians. Jeff Sessions, and Sarah Huckabee Sanders have gone as far as to use the Bible as justification for these acts. Are we really surprised though? I have even seen comments on social media saying that “If they didn’t want their children taken away, they shouldn’t have come here illegally.” To me, that’s essentially saying the same thing as “If they didn’t want to be killed they shouldn’t have been Jewish”.
Where is the compassion for others? Have we really sunk to a point where taking children from their parents is a justifiable act of border protection. These are not terrorists, these are people seeking a better life and better opportunities for themselves and their families. My family immigrated here from Poland, Italy, and Germany and came through Ellis Island many years ago. They were here for those same opportunities that these people now come to America to find.

ICE officers, just following orders, and randomly carding people who are just trying to make a living, are grossly and overzealously committing vile acts, and they don’t really seem to care. For the President of the United States to condone these actions, and even say that they are a deterrent for other people coming into this country is frankly wrong and, dare I say, evil. I condemn ICE, this administration, and anyone who decided that this was something that was ok to do and that supports this. “For I was a stranger, and you did not welcome me”. 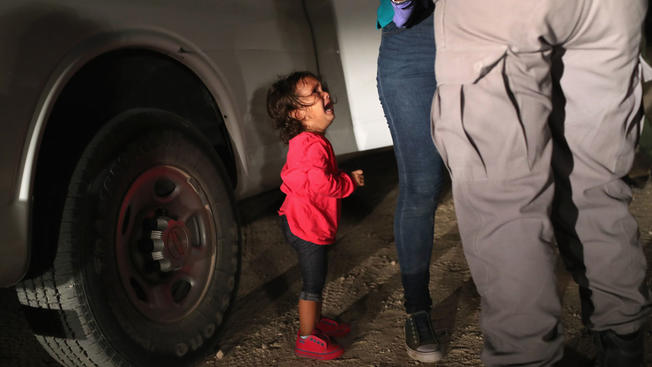 The most important thing to do is to raise awareness, to get more people outraged and willing to fight against this heinous injustice. Call your representative, protest, whatever you can do to help. History will remember which side we were on.

Today, the president signed and executive order to keep families together at the border, which is a good start, but it doesn’t erase the fact that there are still children in detention centers separated from their families. The fact that such detention centers even exist at all is an issue unto itself. Still I urge people to hold our elected officials accountable, and make sure that they hold their promises. Our solutions to immigration problems can not just be deportation. We need to solve these issues without resorting to such violence and abuse.