What’s up with the goats, Jack?

Two weeks ago, I was lucky enough to go see Last Week Tonight with John Oliver, or as my mom calls it, That Last Week John Oliver Show. I had been trying to get tickets with my friend, Brian Ma (hit him up, ladies) for months, and we were finally successful. I’m assuming most of you reading this have seen the show, but for anyone who hasn’t, it involves a very British-looking guy, John Oliver, sitting at a desk and talking about news stories that happened in the previous week. But you know all that. I’m here to tell you about the Last Week Tonight you don’t see on TV.

Okay, that last sentence sounded a lot cooler than it actually is. Like all late-night shows, tickets are assigned through a lottery you can enter online about a month before taping. I cannot recommend entering these lotteries enough. Tickets are free if you are lucky enough to be selected, and this year I’ve also won tickets to The Tonight Show. Really, just go online and try. 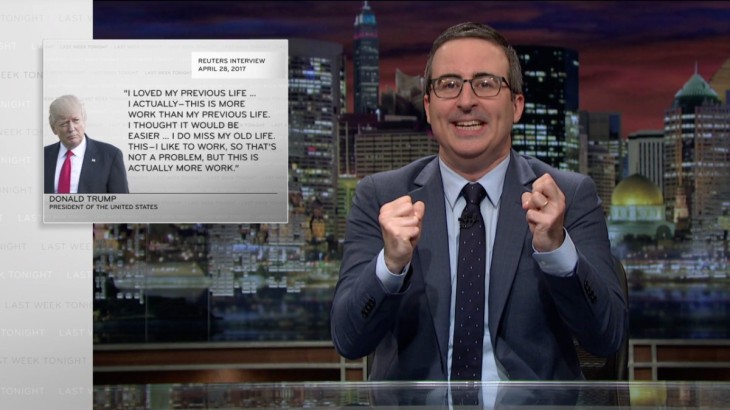 Episodes are taped at the CBS studios on 57th street a few hours before they air on HBO. Before the show starts, a comedian who is not as talented or charming as John Oliver comes out and warms up the crowd. And in this context “warms up” actually means “picks two unsuspecting members of the audience and roasts the ever-loving shit out of them.” Those two people were, you guessed it, Brian and me. It is dis-empowering to be made fun of in front of hundreds of people who know nothing about you, because to them, everything the roaster says about you is true. Nobody knows any better. You can’t defend yourself. To everybody there that night, all I am is a teenager with a mockable voice who has a weird goat obsession. (I’m not going to explain that).
Finally, as my self-esteem was about to shatter into a million pieces and scatter across the floor, John Oliver came out for an audience Q & A before the show. What amazed me about this was just how funny he is in person. I mean, I always knew he was funny, but I also thought he just kind of read off the teleprompter, leading to me having a number of, “I bet I could do that,” discussions with my friends. Here’s a fact…I can’t.
The show itself was outstanding, as always. Sometimes Oliver discusses more obscure topics that people might not be aware of, such as auto lending, or debt buyers, but for the first episode of Season 5 he played a classic: Trump. Specifically, how he interacts with and is seen by the rest of the world. Fact numero dos…not kindly. While Oliver has tackled the topic of Trump many times, it felt fresh this time because he reached beyond how Trump’s actions affect America, to how they affect the international community. Essentially, he looked at what the world thinks of Trump. Fact the third…that he’s a colossal joke. Seriously. Before showing a montage of Trump impersonators from around the globe, Oliver described mocking Trump as “a cottage industry.” But the show ended on a more hopeful note, with Oliver making an impassioned plea to the rest of the world to recognize that Trump is not all of America.

After naming great things about our country, like Mountain Dew, Popeye’s Chicken, and bubble soccer, the New York City Gay Men’s Chorus came onto the stage and performed “All-Star” by Smash Mouth. I don’t mean to be hyperbolic when I say this: It was the most beautiful piece of art I’ve ever seen, and John Oliver is a bad bitch.