I was born and raised in the Catholic Church, and have been going to mass for the past 19 years of my life. I’m actually really thankful that I was raised with this spiritual influence in my life, and I’m proud to be a part of the Catholic faith. However, ever since I was a kid, I’ve always been confused by one specific aspect of my religion. Why aren’t there any women priests in the Catholic Church yet? This question came up recently while talking to a friend of mine, and they pointed out that the Church had theological reasoning for women to be barred from the priesthood. I wanted to look into the reasons the Church has for only male priests, because, as secular culture continues to move towards gender equality, the Church looks more and more archaic. I don’t think it’s unreasonable for members of the Church to expect and demand equality. However the reasoning that the church provides makes it difficult for real change to happen, since the men only standard has some convenient theological backing.

The website “catholicstraightanswers.com” opens their article on the patriarchal dominance of the priesthood with, “In our politically charged world, the debate over the restriction of ordination to men alone too often focuses on the political rather than the theological.” I feel it’s wrong to substitute “political” issues for women’s issues. This phrasing makes it sound like people who are arguing for female priesthood are confusing government policy regarding women’s rights for spiritual issues, when in reality they are advocating for equal ability to serve God. Many of these men only defenders have this frankly condescending view that we just don’t understand that this is really what God wants, and the belief that the church is denying the “right” to become a priest is incorrect because being a priest isn’t a right, it’s a calling. The Church holds that people don’t choose to be priests, but that God calls them to the role. However, this brings up troubling questions about how God Himself views men and women. Why would God, an omnipotent divine being, see one human as being worthy of becoming a priest over another? Pope John Paul II said in his letter “On Reserving Priestly Ordination to Men Alone” that “…the Church has no authority whatsoever to confer priestly ordination on women and that this judgment is to be definitively held by all the Church’s faithful.” This argument cleverly shifts the blame away from the Church; instead of saying that the Church won’t use its power to let women be priests, the pope instead makes it sound like the Church hasn’t been given the authority by God, again bringing up the unfortunate implication that God sees women as being for some reason unfit for priesthood.

The way I see it, women are excluded from priesthood either because human men have cultivated an unfair institution that excludes women based on outdated stereotypes and beliefs OR that God legitimately sees some humans as being inherently inferior to others.

One of the biggest arguments for men only priesthood is that Jesus was a man and all the disciples were men, so therefore only men should be priests. My initial reaction to this argument was that Jesus is a part of the Trinity, thus making him divine, and thus beyond our human definitions of gender. What is important to his existence is the fact that He is God and human at once, and being of the male gender is irrelevant to that. If He had chosen to live as a woman, the effect would be the same: a being who is God and human at once. Him being a man is only important if we interpret it as being important. The Church could just as easily not make a huge deal over Jesus taking the form of the male sex (as other churches do) yet by choosing to do so they are able to deny women the priesthood. The Church’s reasoning extends into the mass itself, claiming that the priest must be male because he is “in persona Christi,” or in the person of Christ. This means that during the blessing of the Eucharist, the priest is acting as Jesus, and since Jesus was a man, it would be impossible for a woman to be chosen in persona Christi. Again, the focus on Jesus’ gender is arbitrary. Following this logic, one could argue that only 30-year-old Israeli Jewish carpenters could become priests, because that’s what Jesus was.
Some feminists argue that Jesus had to take the appearance of a man, because the patriarchal society he was working in wouldn’t have taken Him as seriously if he appeared as a woman. This theory applies to the disciples as well, since it’s likely that they wouldn’t have been taken as seriously in a society where the religious leaders were all men. I think this argument has legitimacy, as it’s important to consider the historical and societal contexts of all religions. The core values of Christianity can be applied to any time period, however we should still recognize that Jesus had to adapt to his time period in order to best preach his message. 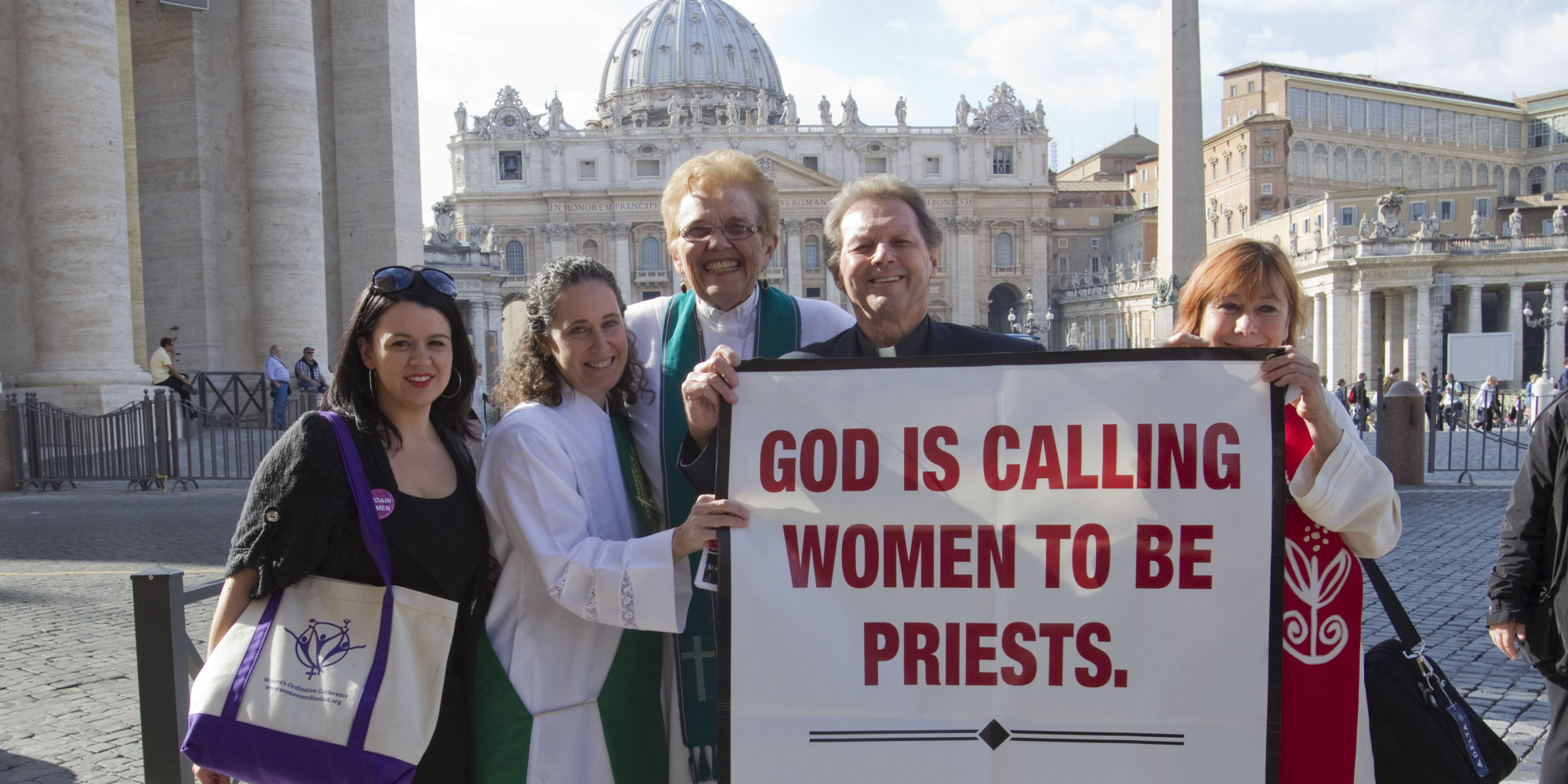 The Church’s response to this argument is that Jesus acted against the social and government order in many ways, and associated with women (especially sinners) where society wouldn’t, and if he wanted to bust the patriarchy he would have. I won’t deny that Jesus went out of his way to resist social norms and assist those whom society ignored. In fact His rebellious nature is integral to His teachings.
The church also insists that by making the priesthood male only, they are just continuing the tradition laid out by Jesus. However, this ignores the fact that women were important figures in Jesus’s ministry as well; Mary Magdalene, among other things, informed the apostles of Jesus’ resurrection (something only SHE witnessed) and was disbelieved. While the Church insists that following the disciples there have never been female clergy, St. Paul says in Romans 15 “commend to you our sister Phoebe, a deacon of the church in Cenchreae… Greet Priscilla and Aquila, my co-workers in Christ Jesus. They risked their lives for me. Not only I but all the churches of the Gentiles are grateful to them.” Not only does he call one woman a deacon (a clergy role that comes before priesthood) but he also calls two women his “co-workers in Christ Jesus.” The women in this passage, Priscilla and Phoebe, have clearly devoted their life to the Word. Further research reveals that Priscilla was responsible for instructing another evangelist in the Word of God. For St. Paul to recognize a woman as an instructor and co-worker and to name another women “deacon” shows that even in the Bible, women were given more ability to instruct and work in the church than they are 2000 years later.
The way I see it, women are excluded from priesthood either because human men have cultivated an unfair institution that excludes women based on outdated stereotypes and beliefs OR that God legitimately sees some humans as being inherently inferior to others. It’s time the Church let go of this sexist tradition, and admit that as an institution they are fallible. The Church insists that they view both men and women as equal, but when a Vatican theologian thinks “men are more likely to think of God in terms of philosophical definitions and logical syllogisms” its clear that’s not the case. Portraying what is clearly human imposed tradition as sacred fact is manipulative and unhealthy, and hurts the Church almost as much as it hurts its women members.