In order to keep readers up to date with current events, we decided to start this weekly feature, in which we present short, concise explanations of major topics that have occurred that week in the news. As well, we will link to other articles that will provide further information, as well as other articles we believe coincide with the story. This feature will be published every Friday.

Congressman is Victim of Shooting at Baseball Practice

On Wednesday, Rep. Steve Scalise, as well as three other civilians, was shot by assailant James T. Hodgkinson during a baseball practice. Scalise is still in critical condition, having undergone multiple surgeries since the incident. Hodgkinson died in a shootout with the police.  His identity was unknown at the time, but he was identified posthumously. Hodskinson, a Bernie Sanders supporter, who had come to Washington to protest, was specifically targeting Republican lawmakers. The shooting has prompted a bipartisan response of sympathy for Scalise and condemnation for the violence. Bernie Sanders himself condemned Hodgkinson’s actions. This attack is shocking and disheartening for many, and stresses the need for further gun control. Many on the right view this as a violent attack by “the left” on Republicans. This should not be construed in this way, despite what people such as Alex Jones, who argued to the contrary of this, say.

Steve Scalise Among 4 Shot at Baseball Field; Suspect Is Dead 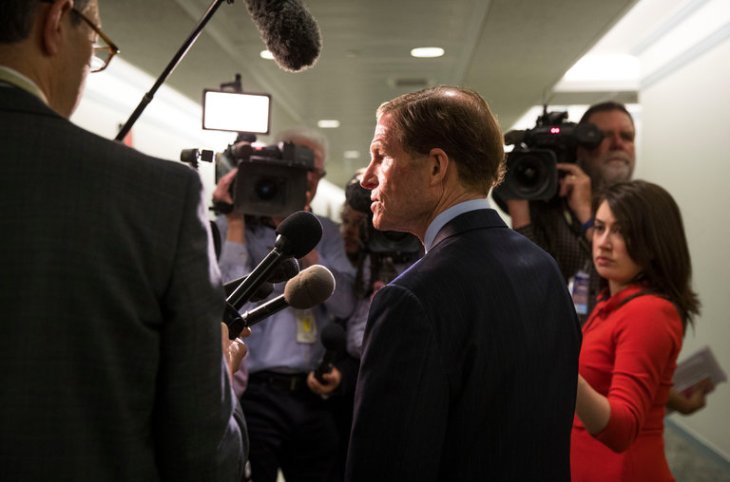 196 Congressional Democrats have filed lawsuits against President Trump for emoluments–essentially, receiving gifts and favors from foreign leaders that are considered unethical. In this case, they are using emoluments to refer to Trump’s continued business ties, which Congressional Dems believe also are unethical when dealing with foreign governments. (Consider, for example, a pre-inaugural trip to Japan in which the President-elect helped Ivanka broker a deal for the Trump organization.) While legal experts question if these members of Congress (as individuals) will have standing to sue, this board action does represent a serious challenge to the President. Democrats are willing to openly accuse the President of violating ethics. It is also worth noting that this does not directly involve Russian interference in the election, which is perhaps the larger scandal surrounding the Trump administration. However, the presence of the current suit suggests that a possible impeachment process could occur for a number of reasons

On Tuesday, the attorney General Jeff Sessions testified before a committee of senators who were leading the probe into Russian election meddling and President Trump’s ties to Russia. Sessions, called any claims of collusion with Russia by him an “appalling and detestable lie”. Nothing of note broke out of the testimony, as Sessions denied any discussions or contact with Russia, as well as refusing to answer questions over President Trump or James Comey. Sessions also refused to discuss private discussions he has had with President Trump.  Many have called out Sessions over this testimony, arguing that he is not acting as America’s attorney, but rather President Trump’s, accusing Sessions of both protecting and lying for the President. It should be noted that key parts of Sessions’ testimony have been contradicted by many, including even Russian lobbyists.

Uber, after developments in recent weeks in regards to their handling of the many sexual harassment allegations against Uber drivers, has announced that its CEO, Travis Kalanick, will take a leave of absence.  Mr. Kalanick’s official reasoning for this is in order to allow him to grieve over his mother’s death. The leave is only temporary, but for the moment it is an indefinite amount of time until he returns to his position. As well, Uber lost another higher up, David Bonderman, who departed the company after making sexist remarks.  He made these remarks at a meeting amongst Uber staff members to discuss company culture and policy in order to change the company to prevent further controversies and issues. His comments came off disgusting, and were made at a very terrible time. He stepped down immediately after these remarks.

On June 13th, Virginia held its primaries for the 2017 general election, including a vital race for governor. On the Republican side, candidate Ed Gillespie edged out Corey Stewart, an ultra-conservative and pro-Trump candidate. For the Democrats, Ralph Northam beat challenger Tom Perriello, a progressive who had the endorsement of prominent progressives including Bernie Sanders himself. The general election will be held in November, and the result of the Virginia governor’s race could either cost Democrats an important governorship, or prove the strength of anti-Trump sentiment.

On a Tuesday night in America, however past midnight in Britain, a fire erupted in a massive 24 story apartment building known as Grenfell Tower, in Western London. The fire occurred late at night, and continued until the morning. Around 200 firefighters had tirelessly fought to quell the fire, eventually succeeding. At this moment, it is unknown what has caused the fire. However, problems with the infrastructure of the building, as well as a good amount of corner cutting, in regards to the infrastructure and fire prevention measures, were found. This is believed to have caused the fire to spread and be as destructive and deadly as it was. The death toll throughout the incident kept rising, and has now gone above 30 people, with many still missing or hospitalized. In the days afterwards, numerous people have taken to the streets in protests both over the building and the details that emerged over the building infrastructure, alongside protesting the British government and their handling of the entire issue, including their lack of response or assistance to the many who are now homeless.

Everything we know about the Grenfell Tower blaze: Why did it happen and how many are injured?