On Sunday, members of both parties in Congress reached a deal over the budget to prevent yet another government shutdown. The deal includes victories for both sides. Democrats gain more spending in key policy areas, including domestic policies, which President Trump’s budget proposal promised to cut. Republicans have gained increased spending on the military and border protection.  However, despite the deal being favorable to both sides, many have taken note that the real loser of the deal is President Trump.  Any funding for his wall along the Mexican border was not included in this budget. Sean Spicer, in a press conference, countered these arguments and presented the deal as a victory for the president. He promised that the wall will still be built. Other analysts have noted that this deal signifies a unity of the congressional legislators against the president. Chuck Schumer, the Senate Minority leader, described the deal as a “united front” of both the Democratic and Republican Parties against the current administration. Commenters have found that this proves to be a worrisome sign to the president, as Congress appears to be exploring ways to circumvent and lessen the president’s power and influence.

In the wake of the resignations of many of the top members of Fox News over sexual harassment lawsuits, including most recently Bill O’Reilly, another member of Fox News has resigned.  On Monday, Bill Shine, the co-president of Fox news, was ousted. Shine was one of the top brass in the programming station, and a close friend of Roger Ailes, the former Chairman. Ailes had resigned a little over 10 months ago over sexual harassment lawsuits. Shine has been criticized as helping cover up Ailes’ sexual harassment allegations, with some going as far to say that he in part enabled Ailes’ actions. These recent shake-ups and firings have caused a lot of unease and chaos at Fox News, a station which has prided itself on being virtually unchanged for the last 2 decades. Shine’s now vacant position has been filled by a woman named Suzanne Scott, who has been with the company since 1996. 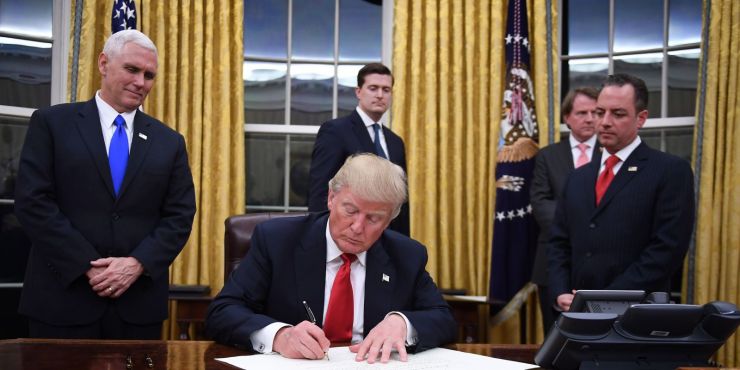 Saturday marked President Trump’s first 100 days as the United States president. A president’s first 100 days is supposed to be when he is at his most influential and popular; when they should be most able to get their various pledges and promises accomplished. It was a term created in the 1930s, by then President Franklin D. Roosevelt. At the time, the measure was applied to Congress. For contemporary Untied States politics, it has been used as a way to rate the effectiveness of a presidency. Trump’s first 100 days have left commenters and speculators very divided. On the one end, much of what was promised by the Trump campaign has not been accomplished yet. The Affordable Care Act is neither repealed nor replaced, the wall is not even funded, and his attempts at banning Muslims from entering the country has failed. Even some of President Trump’s views and beliefs as a candidate, especially his views on foreign policy, have been reversed. President Trump is keeping NAFTA, getting involved in Syria, and not backing out of NATO. Supporters have hailed his first 100 days a success, while opposition has said that his first 100 days have been a failure. President Trump himself has openly boasted of his success. He has also questioned the first 100 days as a measuring tool, something which other commenters have also been doing.  However, reactions to the first 100 days are just like reactions to his presidency as a whole, completely divided and complex.

Trump Tracker for the First 100 Days

On Friday, it seemed that the Budget negotiations between faculty and the administration had come to a head as a deal was seemingly reached.  However, things proved dicey when on Sunday the faculty side of the argument was given news that the administration had added further changes to the deal not previously agreed upon. Therefore, the faculty side, led by Andrew Clark, Chair of the Benefits and Salary Committee in the Faculty Senate, said that the faculty will not agree to the deal unless it is the exact deal made on Friday.  However Bob Howe, the university’s Director of Communications, provided a different take, presenting that the offer is still there and unchanged. This has been a major issue at Fordham for the past few months, and it continues to get more complicated and muddled.  Hopefully, both sides of the negotiations can reach an agreement before further complications and problems arise.

Fordham’s Contingent Faculty is Angry and Rightfully So – the paper