By John Looby
Co-Editor in Chief 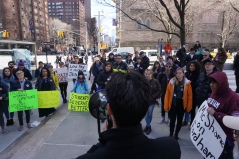 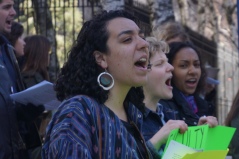 On Saturday, members of the student body and faculty of Fordham University gathered at the Lincoln Center campus to protest the treatment of contingent professors.

Contingent faculty members are both part- and full-time professors who are non-tenured like adjuncts.

The protesters aimed to force the university to address the questionably low wages paid to its adjunct faculty, and its ongoing efforts over interfering in the deliberations of the contingent faculties’ attempts to unionize.

The protest occurred during the span of Lincoln Center’s Spring Preview in an effort to show prospective students just what they’re getting into should they decide to attend this university.

The chants of the protesters called upon Father McShane directly to answer for the allegations against the Jesuit University. By many accounts, Fordham is currently failing to live up to the Catholic ideals that should define it. Many see the lack of fair wage and the right to unionize to be acts that unjustly take advantage of professors.

For those involved in the protest, students come to this institution for an education. The quality of which depends upon the rights held by those who instruct them. A professor forced to work at multiple other institutions simply to make ends meet cannot give students the attention they pay for and deserve.