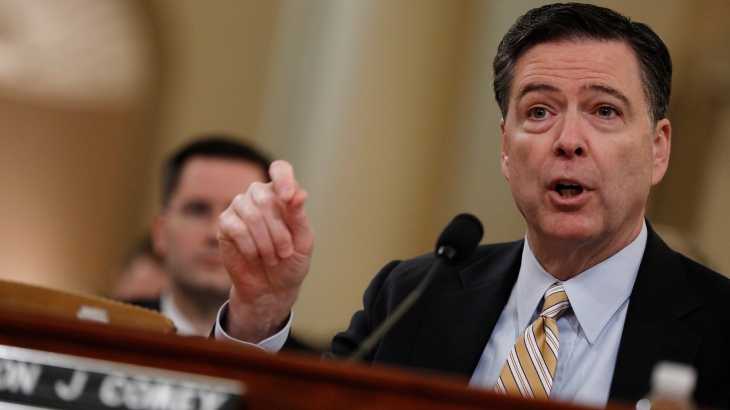 On Monday, FBI Director James Comey appeared before a House hearing in order to testify about President Trump’s recent allegations that Former President Obama had wire tapped him.  In the hearing, Comey said that there is no evidence to support these accusations. He added that a President is unable to actually do the actions Trump is accusing Obama of conducting. Also during the hearing, Comey stated that his agency is exploring possible links between the Trump party and Russia.  At the same time, he added on that Russian President Vladimir Putin obviously favored one of the candidates in the election. Sean Spicer, in a press conference after the meeting, said that “nothing has changed”, and that “investigating and having proof are two separate things.” During the hearing, Republicans wished to focus more on the information leaks than Trump’s ties to Russia. However, the Democrats wished to push Trump’s ties to Russia more in the hearings.  Afterwards, Trump went on a tirade on twitter in reaction.  At the same time, the Kremlin released a statement, calling Comey’s comments on Russian interference “confused”.

Trump’s wiretapping accusation comes to a head at Comey hearing

Conservative and controversial talk-show host Tomi Lahren has reportedly been suspended from her show on The Blaze, an online conservative news and entertainment network.  This comes a week after an interview on The View, where Tomi expressed some counter-party opinions. Lahren, a self-described conservative and constitutional Republican, reaffirmed her pro-choice beliefs. Lining up with her belief in limited government, she stated “stay out of my guns and you can stay out of my body, as well” while simultaneously indicating that pro-life Republicans were hypocritical. Lahren has made a name for herself by bashing millennials, liberals, the Black Lives Matter movement, and Colin Kaepernick, just to name a few.  Many conservatives are firing back, calling her a hypocrite. Glenn Beck, founder of The Blaze, said that he could not stop a person who believed in abortion rights to work at his company. However, he did not directly comment on Lahren’s status within the company. The “suspension” might possibly stem from Lahren’s remarks about pro-life Republicans more than her other comments. At the same time, rumors have been circulating that she might leave the network before her contract expires in September.

Last week, the UN announced that over 6 million people in Somalia- about half of the population- are victims of famine and therefore need humanitarian assistance. French Snapchat and Vine star, Jérôme Jarre, saw an article about the crisis and knew he had to help. Jumping to social media, Jarre started the hashtag #TurkishAirlinesHelpSomalia, in order to reach out to Turkish Airlines, the only airline that flies into Somalia, to bring food and water to those in need. With the further help of celebrities such as Ben Stiller, Colin Kaepernick, and Casey Neistat, Jarre started a GoFundMe page. Eventually, the hashtag began to trend. Over the weekend, Turkish Airlines announced that they will be sending over a cargo plane full of supplies on March 27th to Somalia and that they will be carrying additional supplies on their passenger flights. The GoFundMe will be handled by the Ben Stiller Foudnation. Currently it is just shy of $2 million.

Casey Neistat’s behind the scenes video

In the 1960s, Robert Moses created an expressway that went through the Bronx, a part of Interstate 895, called the Sheridan Expressway.  This Expressway unfortunately cut off a neighborhood in the South Bronx from the Bronx River, causing a major hindrance for locals of the area.  However, Governor Cuomo has recently announced  a plan to demolish the expressway, and replace it with a pedestrian friendly boulevard. The expressway will now lose its designation as an interstate highway. The new expressway will have pedestrian crossing areas, and bridges connecting the neighborhood to other parts of the Bronx.  At the same time, side roads will connect off of the expressway, in order to decrease traffic. In his speech, Governor Cuomo described the Sheridan Expressway as a “mistake”.  The plans are set to be completed by 2019. The locals, who have been blocked in for many years by this road, are expressing relief at Cuomo’s announcement